Parliament of World’s religions summit in 2014. 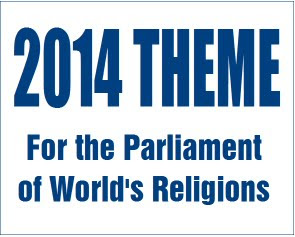 Themes for the summit of Religions in 2014

The theme that might capture our imagination and encapsulate our issues in 2014 would be, “A legacy for the next generation” or “A legacy for seven generations.” It is not a new idea; it is a tradition of the native peoples of America.

The issues that affect our lives in the coming decade will continue to be environment, water, hunger, religious and ethnic intolerance. If we shy away from consciously shaping our future, we may drift into the abyss of incoherence. We may be fighting against deeply entrenched positions rather than finding solutions to the common issues.

Although the environmental future looks gloomy, the world is a better place today because of a good legacy bequeathed to humanity by people of all faiths that came before us. We owe it to the coming generations to leave the world a little better than we found it, to usher an era of justice and peace. Prophet Mohammad (pbuh) described a good deed as an act which benefits others, such as planting a tree that serves generations of wayfarers with fruit and the shade with a clear realization that we may not be the beneficiary.

A theme like, “A legacy for next generation” can also address the issues we consistently face. The social cohesion in particular and religious integrity in general continues to be challenged. The anti-Jewish, Gay/Lesbian, Catholic and Immigrant protest by Fred Phelps last week; the courts ordering to tear down the Sikh Gurudwara in Austin; the challenges against the planned Muslim center near ground Zero; the shootings at the Holocaust Museum in DC; the Arizona anti-immigrant laws; the rights of a woman to be a preacher and the resistance she faces to be the president and a host of other trends may scar the social fabric of our nation in the coming years. God has his own ways of repairing the world and the Parliament of Worlds Religions in 2014 may serve as a catalyst to a positive future.

“Sharing the planet together” is another viable theme. A dash of unselfishness is a necessity for all of us to feel safe and secure, it sails an individual or a nation through the good and bad seas fairly smoothly; indeed it is an insurance policy against the vulnerable moments of life.

God’s creation is intentionally diverse and each one of the seven billion of us has his own unique thumb print, DNA and a mind, and it is time we respect the diversity of thought and worship as well.

The pastors, pundits, imams, rabbis, shamans and other religious and spiritual leaders have a responsibility to bring about a new paradigm in our thinking; consciously creating “a legacy of pluralism” for the next generation.

The Council for a Parliament of the World's Religions was created to “cultivate harmony among the world's religious and spiritual communities and foster their engagement with the world and its guiding institutions in order to achieve a just, peaceful and sustainable world.”

A coalition of diverse community organizations is developing in the DFW Metroplex and is humbly seeking to be represented by every religious, social, ethnic, cultural and diverse landscape of our region.

The greater Dallas/Fort worth is blessed to be one of the three cities bidding to host the Parliament of World’s religions in 2014, the others being Guadalajara, Mexico, and Brussels, Belgium. The horizons of the religious landscape is opening up from constriction to inclusion.

The parliament had a specific theme in each one of its previous three events. “Hearing Each Other, Healing the Earth” was the theme in Melbourne in December, 2009, with a focus on inclusion of the Native traditions. Nearly 6,500 people representing 220 traditions attended some 600 programs in six days. Barcelona, Spain, took on “Pathways to Peace” in 2004 to understand the integration issues with the influx of immigrants from North Africa, about 9,000 people from 75 countries participated in the event. After the successful defeat of Apartheid by the catalytic inter-religious movement, a new energy was need to lunge forward and they chose the theme of “A New day Dawning” in Cape Town, South Africa. In 1993 the Volunteers at the Parliament of the World’s religions made a commitment to hold the event every five years.

Mike Ghouse is a speaker on Pluralism and Islam and offers pluralistic solutions on issues of the day; a frequent guest on the media. His work can be found in three websites and 22 blogs listed at http://www.mikeghouse.net/

My response to a comment at the Dallas Morning News:
# # #
It is always good to hear a different point of view, since I was a witness to the 2009 Parliament event in Melbourne, Australia. I have an enriching experience to share.

One of the problems was that they packed 600 programs, and in my interviews with people on the street and inside the hall was that they wished they had attended all. I attended every program between 7:30 AM to 10:30 PM that I could possibly attend, including the plenary sessions. Indeed, that was a good problem to have. There were so many volunteers that you could not be lost any where in the convention center. Bringing over 220 religious traditions together under one roof was not easy, but they handled it very well including the last minute changes.

For those of us who desire to witness as many religious traditions as they want, the parliament event is the one to go to. You get to listen to the most revered scholars on the earth.

Like any family, personal or business budget, the Parliament has a budget to do the right thing and it is a challenge to the people of North Texas, rather Americans to see that they raise the money. $8 Million Dollars is a paltry sum if we evaluate the conferences that take place in North Texas. If all the Citizens of Metroplex pay $4/each by foregoing a coffee and a soda for one year, the money is there. We are the BIG D and we can do bigger things than that.

Dallas/ Fort Worth Metroplex has more than 150,000 Hotel rooms and at least three large convention Centers. We have handled conventions of more than 20,000 people at a time. We are a great city and we can host any event any time of the year. The National Builders, Lenders, Realtors, software conventions have carried over 15,000 people in each one of their events. I am sure about 4% of the people were dissatisfied in all those events, Parliament event is no exception. Even our own guests at our parties have that ratio.

There was a lot of interaction; interfaith as well as intra-faith, obviously nothing will be satisfactory to every one who attends the event, but an overwhelming majority was indeed satisfied. Virtually every room was packed with people, the topics were fascinating and the interactions were incredible.

On the last day of the event, there was flag ceremony; being a pluralist I jumped in and became a facilitator to what happened there; I asked each one of the persons to pick a flag of the nation that is not theirs, it helps to step into others shoes and feel it. I asked the Rabbi from Israel to pick up the Palestinian Flag and vice versa with the Imam from Palestine, I asked an Indian Swami to grab the Pakistani Flag and an American to grab the Cuban flag… I went around and around advocating picking flags of others. The exhilarating feeling of being the other was incredible. People rejoiced that to the hilt. It was an enriching experience. The picture are all there at www.Parliamentofreligions.org and http://www.peacenext.org/

We are one of the most diverse Cities in the United States and a convention like that will become a catalyst for the much needed social cohesion.

Last week, as a Muslim I stood up and joined in with the Jews, GLBT, Catholics, Immigrants and others and offered prayers of Good will outside and inside of the Holocaust Museum and other places. Indeed, the Holocaust Survivors including Max Goldblatt and one of the founders of the Holocaust Museum, Mike Jacobs and other members joined in with me for the goodwill prayers. This is the kind of Dallas I envision, standing for each other and being there for each other and we hope that the Parliament will become a catalyst in helping us all look to each other as Americans and nothing but Americans, meanwhile we need to continue with our individual and group efforts.

I am glad you made the comment, indeed, the Parliament is not about one world church; here are the founding principle which they adhere to:THE PRINCIPLES1. Promotes interreligious harmony, rather than unity2. Based on convergence of purpose, rather than consensus of belief and practice3. Operates through facilitation, rather than formal structure4. Seeks to build trust as much as agreement
http://www.parliamentofreligions.org/
Posted by TM at 3:55 PTG